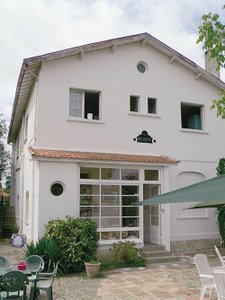 City Soulac is located in the northwestern department of the Gironde, in the old province of Guyenne and the Médoc. It is located not far from the Pointe de Grave, which marks the northern end of the Landes de Gascogne. Its coastline is on the Silver Coast, or Côte de Beauté if the limit is considered the tip of Negad located at the southern edge of the town. It consists of sandy beaches lined with dunes. Part of the town is covered with pine forests, while marsh along its eastern end. The town has two coastlines, one on the Atlantic Ocean, the other on the Gironde estuary.