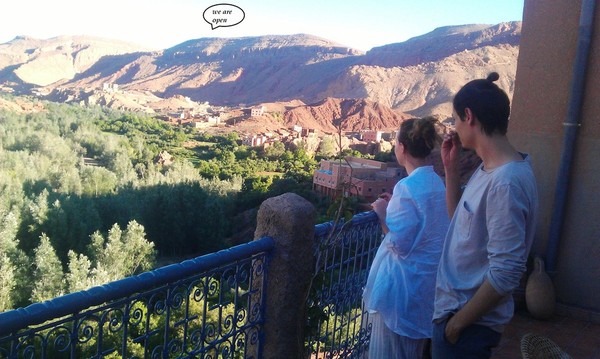 Riad dades was a kasbah that domintated all dades valley, all our rooms opening the windows to the beautiful dades valley
The adobes
The other traditional construction system is the mud and straw bricks dried by the sun, called adobes. With these bricks, bound together by the same mud and straw mixture, are constructed the thin walls in the second or third floor, pillars, arches and decoration.
The Pisé
The usual construction system of all described architectural models is the pisé or rammed soil, which consists in piling the damp earth -without straw- in a wooden formwork and to ram it down to give it consistency. Once completed a bit of wall, formwork is removed immediately and sticks that supported it leave the pisé buildings characteristic holes, but they can also be clogged with soil.
.The coating
The walls and roofs are coated inside and outside with the same mixture of mud and straw, which we renouvlite each 6 years in the first case but should be renewed almost every 2 year on the terraces
The ceilings
The ceilings of riad dades are made with reeds on wooden beams of aspen tree, . These reeds are substituted by bambou stems that can perform geometric designs. The whole set is covered with a soil layer of almost 25 centimeters.
riad dades selling

From the N10 main road (Ouarzazate to errachidia), at the roundabout just before Boumalne Dadès, ( if you are coming from tinghire as you passe the towne boumalen dades acrossing the oued dades bridge ) take the secondary road N704 (Boumalne Dadès to Msemrir). The riad it s just at 9 km from this round about, in the beautiful village of Ait Ibrirne . The GPS co-ordinates are: GPS : (
31.436579°N, -6.010036°E )
by the public transport
Boumalene dades buses station it s only 9 Km away from ait ibririne village the location of riad dades if you give us ahead your arriving time to there we will come and pick up you from the bus staion. in the bus station we have two kind of taxies mini-bus they are mostly mercedes benz 207 or 307 they are for 15 seat and we have grand taxi most of them are the romanian car DACIA lodgy, they are for six passenger + driver the cost of the trajet it s 5dhs each personne. just say that i m going to riad dades evryone will help toreach us.

Ouarzazate airport far away 130 Km from riad dades it s only 2 h 00 mn by private car or taxi the cost of a taxi is 3  per personne .
many buses leave ouarzazate toward boumalene dades where we can come and pick up you from boumalene dades bus station just let us to know your arriving time.