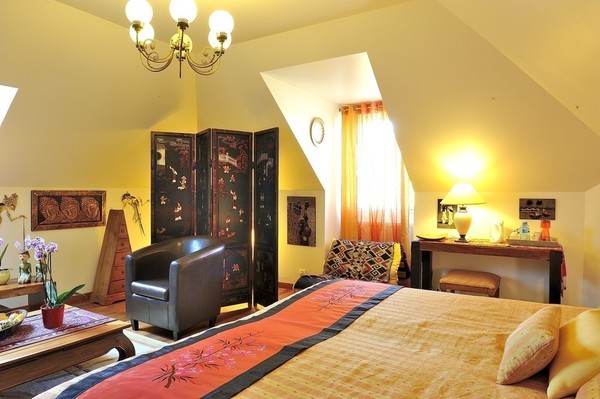 We have 5 beautiful rooms specifically designed and built for 13 guests on the first floor of our newly built home and luxuriously decorated on the basis of different themes.
As a matter of fact, we have been inspired by our travels around the world and the different countries cultures discovered and learnt to appreciate.
All the rooms are equipped with their private bathroom with shower, bathrobe, furniture and toilet. The bathroom floors are made out of rare Burma teak wood with joints similar to ship's decks.
All rooms are equipped with kettle, cups, coffee and tea.
For the comfort of our guests, we also have included armchairs and a table in each room.
The first room, based on the Mediterranean theme, is named "Villa d'Este". The Villa d'Este in Tivoli, Italy, with its palace and garden, is one of the most remarkable and comprehensive illustrations of Renaissance culture at its most refined.
The second one is based on the Orient theme and is called "Samarcande". Samarkand is one of the oldest inhabited cities in the world, prospering from its location on the trade route between China and the Mediterranean.
The third one is inspired from the rising sun country, Japan, and bears the name of "Katsura". Katsura Imperial Villa, is one of Japan's most important architectural treasures, and a World Heritage Site.
The fourth one, though thought of as Indochinese, was more influenced by Vietnam in fact and hence was called "Dai Noi". In Vietnam, at Hue's city heart, on the rivers left bank, is the Chinese-style Vietnamese imperial citadel, Dai Noi, from which the Nguyen family controlled southern and central Vietnam from the mid-16th to the mid-20th century.
The fifth and last one, called "Senayan", bears the name of the quarter I used to live in in Jakarta, on Java island, Indonesia, a fascinating and complex country.

Coming from Saint Nazaire, take the D213 and continue for 7,3 km in the direction of La Baule et Guérande. Take the exit in the direction of LA BAULE-LES PINS -ESCOUBLAC - GOLF DE LA BAULE; At the round-about, take the first exit and continue on : Boulevard Joseph Houssais, towards : LA BAULE-CENTRE - LA BAULE-LES-PINS - ESCOUBLAC; Enter in La Baule at 1.5 km . Take Avenue Henri Bertho (0.7 km); At the round-about take the second exit on your right and continue on: Route du Radeau (0.4 km); turn left at : Route du Meunier; turn right at the second street and you have arrived after 200 metres on your right.