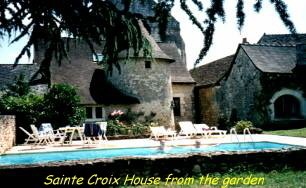 The village of Angles-sur-L'Anglin is in Central France, half way down and about 150 kms inland from La Rochelle on the Atlantic coast and about 45 kms North-East of Poitiers. Tours is about 100 kms North-West. The A10 Autoroute exit 26 at Chatellerault-Nord is about 30 kms west. The A20 Autoroute exit 15, north of Argenton-sur-Creuse is about 60 kms east. Poitiers has an International Airport, Poitiers Biard, with daily flights direct from London Stansted with Ryanair and daily connections to the Air France regional hub at Lyon and then onward worldwide connections via Paris. Tours has an International Airport, Tours Val de Loire, with daily flights from London Stansted with Ryanair. Poitiers is on the main TGV train line Paris-Bordeaux with direct connections from the London Eurostar at Lille straight through to Poitiers on a daily basis. The Lille TGV stops at Paris-Charles-de-Gaulle Airport for onward connections to regional UK and other international destinations. Chatellerault railway station is nearer to the village than Poitiers but has less 'stopping' trains For those of you driving, Sainte Croix is near the river in the Ville Basse, immediately right as you exit the bridge coming from the village centre. We are opposite the Abbey Church of Sainte Croix.