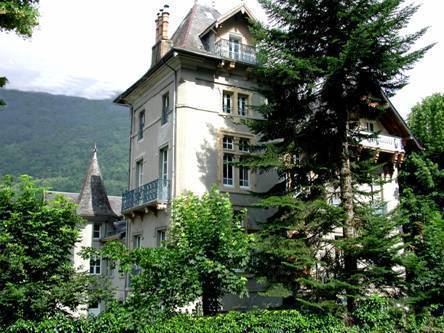 The Sévigné House,a manor of XIX century, is situated opposite the thermal baths of Bagnères-de-Luchon,a little town in the middle of the Pyrenean Mountains. Built between 1852 and 1855 and in the past called Buen Retiro, the most famous resident was Charles II, King of Etrurie, Sovereign of Parma, Italy.This imposing manor from the XIX century ,very recently restored places at your disposal its 5 rooms of prestige mixing antique furnitures and modern comfort. Meals at the manor, on reservation. Rooms equipped with baths or shower with jets, TV and Internet high-flow mobile (Wifi).Lounge with library and chimney opening on the terrace and the park. Spoken English and German. No animals allowed.

Exit 17 of highway A64: direction « Luchon Montréjeau » (45km) Arriving in Luchon take the « Superbagnères » direction. Our manor layes at the end of the thermal baths park, between the Superbagnières road and the street towards St Mamet