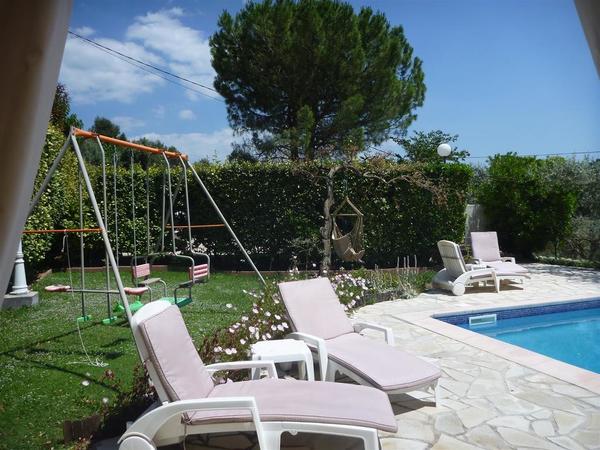 Saint-Savournin is a French commune of 3,151 inhabitants (2009), located in the department of Bouches-du-Rhone and the region Provence-Alpes-Cote d Azur. It is located at the eastern end of the Massif de l'Etoile between Cadolive and Mimet. Its inhabitants are called Saint-Savournicains, Saint-Savournicaines.
The climate of Saint-Savournin is strongly influenced by its situation:
The village is hung on the northern slope of the Étoile massif.
Its average altitude is quite high (more than 440 m).
Thus, Saint-Savournin is distinguished from other towns in the region by its harsher climate: the afternoon temperatures are often below 3 to 5 ° C to those of Aix-en-Provence or Marseille.
The town is close to the national park of Calanques about 14 km.
Located 14 km from Aubagne (City of Pagnol), 17 km from Aix TGV train station, less than 20 km from Marseille, Aix en Provence or Cassis and 25 km from Marseille Provence airport, Saint Savournin is in a "golden triangle" that makes all his reputation.

The cottage is located below the guest house where the owners live. access is independent and private parking.
It has a terrace and shaded and private relaxation area.
The cottage of 30m2, planned for 4/5 people is fully equipped and furnished, and comprises:
- a living room-kitchen with sofa bed 160,
- a bathroom with shower and toilet,
- a bedroom with 2 single beds (90 * 200) and a single bed
TV Canal+ and WIFI are available as well as dishwasher and washing machine. Bed linen and towels provided.

A secured access allows to join the shared swimming pool (heated according to season) and the ground of petanque.

The privileged geographical situation makes it possible to go to Cassis, Marseille, Aubagne or Marseille in 25mn.
Many hikes are possible from St Savournin which is on the GR 2013, or other beautiful places such as the creeks of Cassis, the massif of Ste Victoire, that of the Star or that of Sainte Baume.
We can give you "good deals" to get around without traffic jams and visit the emblematic places of different cities.

Possibility of ordering the extremely complete and varied VIP breakfast as well as the table of hosts (gastronomy of Provence) on reservation the day before.
During the stay the owners are available to answer all requests and services.

Arriving from Marseille
1 - Highway A7, then A51 Marseille Aix, exit 2 Bouc Bel air, Gardanne
2 Take the D6 expressway to Biver-Ouest exit
3 - On the bridge, turn right then left towards Biver, Mimet and at the stop turn right on the D58A
4 - Crossing Biver
5 - At the roundabout (Statue Ste Barbe) take the 2nd exit on the right, direction Mimet (ascent)
6 At the big roundabout, turn left towards Mimet, Gréasque (rise of the Giant))
7 - Pass Mimet, direction Saint Savournin
8 - At the entrance of St Savournin, after the shopping center on the square on the left, there is the car park next to the playground (which is the "13 en promenade" appointment)
9 - At the exit of the village, after the pharmacy, take on the left the D8 towards the Valentine,
The Bouilladisse and continue on 200m.
10 - Turn right in a bend: sign "Le Collet blanc" (in front of labri bus)
11 After 100m, turn right (sign Chemin de la Poussaraque) and immediately left along a series of small garages, then go down the path to Poussaraque
We are at 240 on the right (white gate) just after the entrance of a subdivision.
Arriving from Aix
1 Highway A51 Aix Marseille, exit Bouc Bel air
2 - Take N8 Marseille then left D60A Gardanne, La Salle
3 - Pass over the bridge over the expressway and resume route in step 3 above