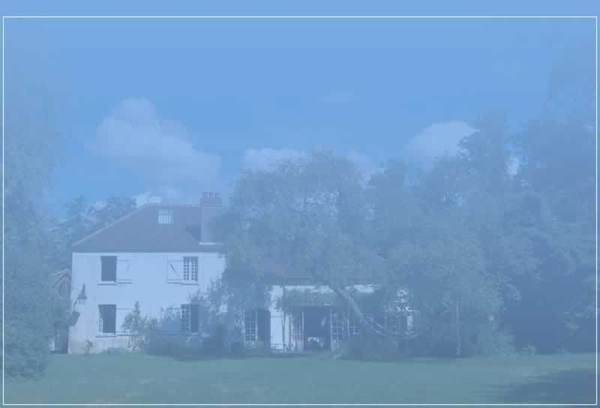 n about 1850 Jules Romain Alexandre Cloud, a carpenter, bought the ruined cider press in the village of Saint-Siméon. At the junction of the streams of Presles and Piétré he constructed a cement spillway with vanes and a short canal to bring the water to the wheel of his sawmill, which he raised at right angles to the cider press. Its structure is unusual, resulting from the use of twisted, vaulted, and knotty beams, the like of which he would not have built for one of his customers. It was not until later that he added his house.

In 1955, an antique dealer and fresco teacher bought the Moulin de Mizande property. He restored the circular trough, the wooden mechanism, the millstone of the crusher, and the large gear with its box-wood teeth. He proceeded to embellish the place with XVII th century carved wooden panels, alcoves, fireplaces, and staircases. The Moulin de Mizande derives its name from the spring that rises in the field, not far from the one that Sanctus Simeon the Stylite created by striking the earth with his stick when he came to preach in Gaul in the IVth century.

Early in April the surroundings are carpeted by a rare form of anemone (ranunculaides) which has disappeared from the rest of the Ile de France. For this reason the Museum National dHistoire Naturelle has catalogued the plant life on this unique site.

The present owner has built a parking lot, a garage, a porch, restored the wheel and the vanes, enlarged the stables, renovated the attics in the house, and improved household comforts, all with complete respect for the original character of the surroundings.
At the Moulin de Mizande we offer our guests peace and leisure, and a warm welcome to the carefully preserved environment of a truly remarkable place.

Why not take a little time to visit this website, give in to temptation, come and see for yourself ?

To reach «Moulin de Mizande» from Paris. Take the A4, East Highway to Nancy Metz, to exit 13 to Provins and Villeneuve le Comte.

From then at all roundabouts, always follow Provins until the first indication Coulommiers, Mauperthuis at Pézarche roundabout where you follow Coulommiers (3° right D402).