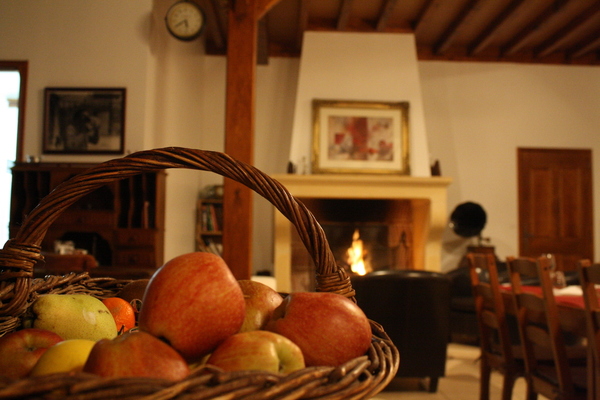 Marduette, Platière, Eparcieux and Bellevue are four guest houses which we propose you.
Quite provided with bathroom and individual toilets, seen on the plots of land of vineyards, overnight stay peaceful guarantee and friendly breakfast served in the living room.

Review by: Chris Davis, Juin 28 2019 6:23PM
Here in Boston we can get a little superior about our slice of American historyPlymouth, Paul Revere, Salem witches, all that. We figure that, with almost 400 years under our belts, weve earned it. But try selling history to the Chasselay family in the tiny Pierres Dorées village of Chatillon dAzergue, France and the response is a wry smile. Because this charming family, on an idyllic farm in a postcard corner of Beaujolais, has been making wine here since 1464a generation before America was (or more accurately, wasnt) a glimmer in the eye of Christopher Columbus. And doing so in a region where grapes have been grown and fermented by someone for over 2000 years.
My wife and I arrived at Domaine Chasselay on a rainy night in November after a long and arduous days drive. I suspect we interrupted the Chasselays dinner, but that did not keep the gracious and energetic Claire from running out of her house to greet us and escort us to our room, a few steps away in a lovely remodeled and updated barn building; in fact, because we visited in the off-season, we had the entire house to ourselves. The impeccably clean and large room, which was simply furnished and featured modern bath and toilet rooms, a writing desk, and a pretty view of the vineyard out the traditional shutter windows, was warm and comfortable. Claire thoughtfully prepared a charcuterie plate (including homemade ham and paté) and a refreshing bottle of their 2016 (12 days of maceration in tank and 9 months like a baby in oak barrels, per Claires note.)
The next day, after a delightful breakfast and chat with Christiane, Claire and brother Fabiens lovely mother, we were treated to a tour of the small operation and a tasting of several of the domaines wines, including an astonishingly good Beaujolais Blanc (Chasselays Eparcieux Blanc), 100% chardonnay. When I suggested to Claires father, Jean-Gilleshimself a classic portrait of a robust French vigneron that their white wine was as good as a fine Meursault, Père Chasselay laughed and observed in French, Its got everything they have except the price! Indeed, this may have been the best $18 white wine I have ever tasted. As if this were not enough, we were then treated to a rare experience: a taste of the legendary Nouveau Beaujolais, in the bottle only a few weeks three days before its official international release: the high point of a two-week trip to France. A visit from a local café owner, evidently there to taste and buy for his shop, generously sharing his baguette and local sausage, rounded out the tasting.
Our only regret is having planned Domaine Chasselay as a one-night stopover en route to the Jura and Champagne. Considering the farms central location within quick striking distance of Lyon, the rest of Beaujolais, greater Burgundy, et al., we immediately began fantasizing about our next (2 week!) visit. Given the truly warm hospitality of this hard-working family and the authentic experience of a stay with them, a return to DC is inevitable.

Between Lyon (25km) and Villefranche (15km to follow the direction Roânne, Lozanne, to cross Châtillon of Azergues, 1st road to the right at the exit of the village, to the left in the Cross of the Rock, then 200 metres to the right.