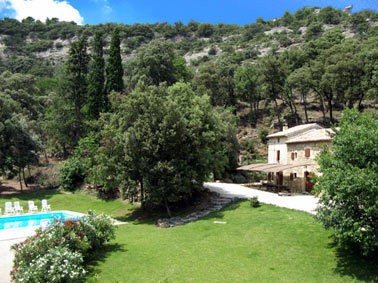 The house sleeps 10 to 12 people. It is a typical Provençal construction built from local stone dating from the beginning of the 19th century.The property is on the edge of a forest area counting several hundred acres. It is well-oriented, being on the south-side of a hill, and has a beautiful view over the valley.
The house is protected from the famous mistral (strong northerly wind) by the nearby hills. It is near Bollène, a small town in the Vaucluse department, on the very outskirts of Provence. However, access to the property (and its postal address) is via Saint-Restitut a village in the Drôme department, which is in the Rhône Alpes region.

On the border of a massive forest of hundreds of acres. The property is situated on the south side of a mountain. Well exposed and enjoys a very beautiful view. The house, protected from the Mistral by the nearby clifs, is found in the limits of the community (Bollène), of the department (Vaucluse) and of the region (Provence-Alpes-Côte d'Azur). The entrance of the property is acessed by the other side of the frontier by the little village of Saint-Restitut (Drôme, Rhône-Alpes). For that reason, the postal adress is in Saint-Restitut.

The access is easy by the highway A7 exit Bollène then follow the itinerary supplied for 7 kilometers.

32 acres of oak and evergreen oak planted in large ledges of a magestic circus of rocks and clifs and dominated by the ruins of the Château de Chabrière give the property a particularly calm ambiance where it gives of a grand serenity. The little pedestrian paths, that wind in every direction, permit one to discover an exceptional view over the distant countryside of Bollène and the surroundings, the dentelles de Montmirail and the Mont Ventoux. In the front of the house, a grass garden lined with laurel roses, lavender, snatolines and rosemary is lined with a little wood of oak trees which make delicious shaded areas; they are at the disposition of those who search for the calm or those who wish to leave the children splashing in the swimming pool. Next to the house, a consolidated ruin shelters a barbecue corner. In the shadows of the oak trees, a large gardin table allows one to eat their meals outside in the beautiful natural surroundings. The outside lighting lets one extend their evenings. A around the house, the tended terraces await the pétanques champions. Near to the pool, the local cabanna contains, as well as the filters of the pool, and washer for clothes, a refrigerator and toilets.

The gardin and the swimming pool are taken care of two times a week. The sprinkling is automatic.

With a lodging capacity of 10 to 12 people, the house is an ancient typically provençale masonry in regional stones dating from the beginning of the XIX century, with windowsills and door frames in stone and roofing in ancient roman tiles. The facade displays two front doors, one leading to the living room, and the other to the kitchen.

On the first floor, three joined rooms, separated by walls of stone. Successively, the kitchen- eating corner, the living room, the dining room. These three rooms are connected and have a tiled floor.


The kitchen as seen, at left in entrance, a very old mantle. In the back, the kitchen is equipped with all of the benifits of the modernisation in offering the chef, sink and draining board, four electric burners, aspirator, electric oven, dish washer, chopping block/working area, multiple sockets, and all of the necessary material to prepare simple dishes or fine quality cuisine. In the front of the room, a table and some chairs permit user-friendly meals or finger pickings in the ambiance ofthe kitchen. To the right, an ancient stone sink conserved in it's original place. It is cut out of the width of the stone wall and joins the living room door.

The living room, situated in the center of the house, walls of well preserved stone while the ceiling of wood logs and large planks were redone but are still the image of the ancient living room. The wood hearth except in an autonomy extreme will not be used out of the cold season; it gives this room another kind of heat. The staircase which leads to the second floor hides a corner toilet and a cupboard. Couches and arm chairs bring the joy of reading, (garnished library, complete with childrens books) of a nice evening, or a night with the television. In the corner of a piece of furniture, a cordless telephone allows you to talk even in the garden.

The dining room contains a very large table to reunite all of the guests. The stone walls set the tone.

In these three rooms, the filtered light filters through the little windows in the provencale crossbar style and contrast with the outside light. The little openings are fitted out with caution, in the Midi, for fear of the heat. The game of the shutters is necessary for those who wish to conserve the fresh living conditions of the early riser.

On the second floor the first hallway deserts the first two rooms and one bathroom This hallway leads to five interior doors and one exterior door in the old wall.


The first door to the right of the staircase leads into the first room, above the living room. It is the biggest. It has a double bed, two night tables, and a dresser with two bars for hangers and six shelves. It is also possible to store your luggage there. The walls are painted in clear colors at the tone of the Midi. Two windows in a stone wall look out over the garden and the swimming pool. This room can have, if demanded, an infant,s bed. This room also has a telephone jack.

The second door to the right of the staircase gives access to a closet. It is not accessible to the tenants.

The exterior door in the old wall is only used as a window. It gives a little bit of light and air. The window on the door can be opened but the door itself cannot.

The third door in the hallway opens to the bathroom. Clear ambiance in white tiles with orange flower designs, this bathroom offers a sink, shower/bath with a mixer tap with thermostatic control.

The fourth door in the hallway gives access to the second room. The rays of light pass through a little window and reveal the double bed in the center of two night tables. The wardrobe is built into the closet.

The very old door to the left of the staircase is the entrance of the second night hallway which leads to three doors and a staircase.

The first door opens to a toilet.

The second door is the entrance of the second bathroom. A dynamic ambiance made by colored tiles. Contains shower/bath, sink, and shelving arangement.

The third door leads the way to a young room, equiped with two single beds, one of the beds holds another pull-out bed.

The staircase leads the way to a dormitory on the mansard-roofed third floor, cut in two by a wardrobe in clear view with two beds to the left and two beds to the right. Two of these four beds equaly offer a pull-out bed, this dormitory can recieve up to six people.

All of the rooms on the second and third floor, with the exception of the bathrooms and the toilets, have a floor made of planks of pine wood which have been polished and finished.

The tourism in the region.

The massive clifs shelter the property and are covered with multiple little paths offer the pleasure of walking, and also the joy of mountain biking. They allow one to visit the charming stone-age village and the Château de Barry, the medieval castle of Chabrière, and to profit of the exceptional panoramic view all around the plateau and particularly at the point situated near to the ageing cellars of the Celliers du Dauphin that one can visit. The ancient stone quarries, of which Saint-Restitut is known for, have been converted into a theater of images (projection on the stone) of a variety of themes.

From the middle of June until the end of July, the side the most typical of Provence is certainly in the heart of the lavender fields. During this period, as well as all of the others, these admirable areas give joy to the walkers. To site just a few of the principale areas, the Mont-Ventoux, Avignon (festival in July) and the Palais des Papes, the pont Saint-Benezet, the forteresse de Mornas, animated by actors in costumes and who speak in the language of the period, the roman ruins of Orange, of the Vaison-la-Romaine,... the Château de Grignan (madame de Sévigné), the Château de Suz-la-Rousse (Wine University), the Abbey de Sénanque (Sistercienne), the Baux-de-Provence, the bories (houses in flat stones "lozes"), the château des Adhémar, the village of Poète-Laval, the Garde-Adhémar de Gorde,... the markets "marchés" of Provence where the principals are in Carpentras, Orange, Pont-Saint-Esprit, Malaucènes,... the antique markets in Isle-sur-Sorgues, August 15th in Barjac, May 1st in Saint-Restitut,... farther away, the gorges du Verdon, the gorges de la Nesque, the gorges de l'Ardèche (kayak), the Bamboo Forest in Anduse,... the wine route(s) of Tricastin or Côtes du Rhône, the festivals of many villages all year long... the regional museums of silk, railways, shoes, vinyards, santons,... the caves de la Madeleines, l'aven d'Orgnac,
...and...
The sea is a little bit more than an hour away (Le-Grau-du-Roi et La-Grande-Motte at 115 km. (70 miles))... the mountains are an hour away in the massive range of Verdon, two hours away in the Alps (ski...)

7 km between Tauleigne and A7