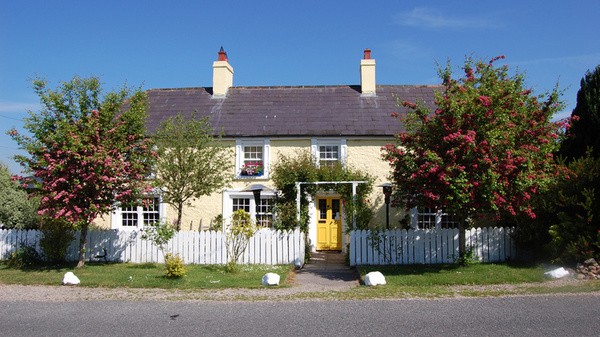 Glencairn Inn is located in the heart of West Waterford,
not far from the Knockmealdown mountains and just a stroll from
the River Blackwater - famed for it's
Salmon and Trout fishing. Offering old world charm, exceptionally
good food and wine at our restaurant Pastis French Bistro and crisp linen sheets on fine brass beds in
comfortable elegant rooms.

A short while ago..

Review by: Larry Hunley, Juil 9 2021 11:08PM
Stayed at this inn after reading Karen Brown's guide. It was called Buggy's then and Mrs. Buggy was welcoming. Mr. Buggy had drawings all over the walls and caught the salmon that we ate that night. Its been awhile since we were there, but I still remember it .

From Dublin: Follow sign posts for "The South" or Limerick or Cork (if you can actually see a signpost for Cork!). This means taking the N7 and M7 towards Port Laoise - which is by-passed. (Important: Unless you plan on visiting Kilkenny or Waterford city on the way, do not take the N9/M9. Although we are in County Waterford, we are situated closer to Cork city than to Waterford city). Take the turn off for Cork (the N8). Later, in Tipperary, watch out for the easily missed turn off for Cahir (aka "Caher"). This is about 8 miles (13 km) past the Cashel bypass. In Cahir, turn right in the centre of the town and drive down past the castle, look out for the sign posts for Clogheen or "The Vee" (R668) (first left after the castle). When in Clogheen, continue to follow sign posts for "The Vee" or Lismore (R668). This road leads you over the Knockmealdown mountains all the way into Lismore.

From Lismore: Take the Tallow road (i.e. turn right at the monument, after the castle) and just outside Lismore, there is a Car Sales showroom called Hornibrooks. Take the right turn-off here for Glencairn, we're just 2 miles from this point, on the right, just after a junction.

From Cork Airport: At the roundabout just outside the airport turn left for Cork, as signposted. You're now heading towards the Kinsale roundabout. It is about 3 miles from the airport. Use the middle lane as you enter the roundabout, although you're looking for the fourth exit. That's the exit after the "City Centre" exit and it's
signposted "N25 (EAST) (N8, N20, N28) Rosslare, Waterford, Dublin". It heads east out of the city towards Waterford (and us!).

A few miles further along the N25 you will enter the "Jack Lynch" tunnel which brings you under the river Lee and out onto another large but more sensible roundabout - so use the middle lane here, initially - you want to take the "Dublin/Fermoy" (second) exit (N8). Some miles later take the exit signed "Rathcormac, Watergrasshill". At the roundabout take the second exit, for "Watergrasshill" and at the next roundabout (admittedly, a barely discernible 'mini-roundabout') go right and follow the main route through the village and beyond. A few miles out of Watergrasshill you'll see some large paddocks on your right, and a turn off for Tallow/Midleton. Take this road. Less than a mile later on a bend on the road, there's a junction. Turn left here (signposted "Tallow" and "Castlelyons"). This road takes you to Tallow, via the small village of Conna and the even smaller village of Curraglass (where there is a Petrol Station). In the middle of Tallow, turn left at the T-junction...