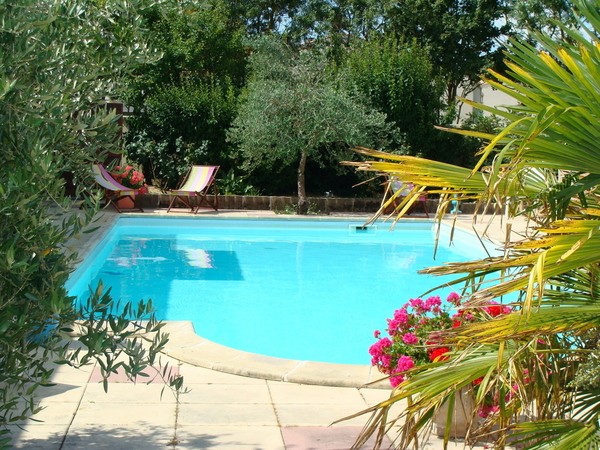 The two rooms are independent from our house and have a separate entrance. Each room is equipped with its own toilet and shower. The beds are 160x200 cm in dimension. Breakfast will be served either on the terrace, facing the swimming pool, or in the conservatory which is common to the two rooms. The rooms are equipped with TNT (cable) flat-screen WIFI access is also possible.. Private parking.
Esnandes is a pretty little village in the Charente-Maritime, just ten minutes away from La Rochelle and the Ile de Ré.
It is located on the edge of the Marais Poitevin, also known as Venise verte (Green Venice). Our house is located in the heart of the village, two kilometres from the sea. You will appreciate its quiet and very calm environment. The village has lots of charm with its narrow little streets lined with holy- hocks, and its cute cream-coloured houses. The village has also an architectural richness in its fortified church dating from the 12th century. Next door to the church you can visit the new Mytiliculture Museum which traces the history of mussel farming, Esnandes having been once the main centre for the cultivation of 'Moules de Bouchot'.
Esnandes is also situated on the Bay of Aiguillon, with La Rochelle to the south and the beaches of the Vendée to the north. The bay is a natural reserve for migratory birds because its ecosystem provides an ideal source of food for birds in transit. The L.P.O (ornithological society) organises walks where you can discover this natural environment and its amazing bird life in more detail.
Esnandes still preserves its authenticity as a Charentes sea-side village despite being very near to the very popular tourist centres of La Rochelle and the Ile de Ré. You will be pleasantly surprised by the calmness and tranquillity of the village, even during the tourist season. It's a perfect place to re-charge your batteries while remaining within striking distance of La Rochelle, the Ile de Ré and the Marais Poitevin!
You will enjoy going for bicycle rides on the coastal pathway which surrounds the Bay of Aiguillon., the impressive Ile de Ré bridge being less than a half an hour away. You can also go for a walk from the house to the Pointe Saint-Clément, from where you will get a panoramic view of the bay. Here you can consult an orientation table and enjoy the magnificent sun-sets. You will also discover the different-coloured 'carrelets' (cabins used by fishermen and women) which are typical of this part of the Atlantic coast.

You may also feel drawn to the golden beaches of the Vendée coast (Les Sables-d'Olonne, La Tranche sur Mer) which reach out to you from a distance of less the forty five minutes.

Go to the north of La rochelle in direction "Ile de Ré" and get out Lagord,then Marcilly and Esnandes