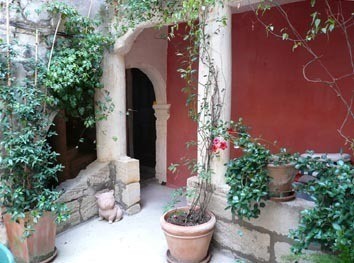 Rates: Double room 2 persons = 60 . Triple = 3 people 70 Breakfast: including breakfast internet access wi-fi medieval village administratively attached to the Languedoc-Roussillon, Vallabrègues is geographically located in Provence which he absorbed the culture, traditions and language. In his novel "Mireille," the poet, writer and félibre (Nobel Prize for Literature in 1906), Frédéric Mistral (1830-1914) was living there Vincent, said, "Vincennes", basket maker and lover of his state of Mireille (1859). Village steeped in history and "stories" Vallabrègues, whose origins date back to the Bronze Age, was the nineteenth century and even until the 1960s, a village of weavers whose feast day is celebrated with pomp each second weekend of August. In a charming and calm the center of the medieval village with narrow streets and fresh, you will taste the torpor of Provence nights and naps lulled by the sound of cicadas without giving up visits to famous sites close all located about twenty kilometers at most Vallabrègues: Avignon and Avignon, St. Remy de Provence and the excavations of the Roman vile of Glanum, Les Baux, Fontvieille and the Moulin de Daudet, Abbey and Montmajour Arles la Romaine with its ancient past prestigious Tarascon and the castle of King Rene Beaucaire and its medieval castle eagles, the Abbeys of St. Roman (built by monks troglodytes) and that of St Michael and Frigolet not forget the fabulous Roman aqueduct Pont du Gard.

by plane: airport Marseille-Marignane: take A-7 motorway towards Salon de Provence. Turn onto A-54 motorway towards Nîmes. The toll of St. Martin de Crau continue on the E-80 just before leaving Arles to Tarascon output. Follow Tarascon by N 570 and D 970. Finally, at Tarascon take the CD 81a towards Vallabrègues. All these indications are found in traffic signals. Nimes airport-Garons: Take the direction Beaucaire - Tarascon. At the end of the bridge of Beaucaire / Tarascon entry Vallabrègues follow signs to the left of the bridge. By motorway A-9 from the south: exit then head east Nîmes Beaucaire - Tarascon and as indicated above. From the North: Exit Roquemaure then head to Avignon Les Angles and direction by RN 580 Aramon by D 2 to the only roundabout and the road towards Tarascon to cross the Rhone and Vallabrègues (right at the exit of bridge) by D 183.